Still not sure if you need an umbrella policy? 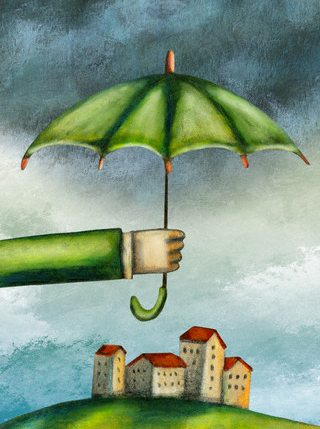 Maybe these TRUE stories will help change your mind:

An insured was a retired doctor with significant assets.  The sun was in his eyes and he made a left turn and struck a motorcyclist and killed him.  This insured carried a $250k liability policy with no umbrella.  The motorcyclist that died was a CEO of a small company.  The full value of the claim was easily $1,000,000.  The insured ended up making a significant (in this case $50,000) contribution out of their own pocket to resolve the claim.

Insured was DUI and was involved in an accident and killed the other party.  The insured only carried a $100k liability limit and they had some assets, although not significant (mainly some equity in their home).  Given the DUI and the fatality, there was likely going to be a very large jury verdict against this insured.  The insured ended up taking a second mortgage out on their home and paid $100,000 of their own money towards settlement.

One insured was involved in a fluke accident.  A lady lost control of her vehicle and went up onto a curb and struck a child who then flew in the air and landed on the street and our insured then ran her over.  There were clearly arguments that the insured was not at fault, but the problem was that the child has about $1,000,000 in medical bills and is in a facility and will likely never work and will have a huge wage loss claim.  The lady that struck the pedestrian only had a $25k limit.  In the state of California, there is joint and several liability, where if there are more than one at fault parties, they can be held jointly responsible for the injured parties special damages (medical bills and wage loss).  So if the insured was found 1% at fault, he could be liable for well over $1,000,000 to the injured party.  In this case, our insured was an engineer and did have a $1,000,000 umbrella policy and we were able to resolve the claim.

A man hired an unlicensed tree trimmer to trim a very large tree on one of his rental properties.  The insured owns several rental properties.  While trimming the tree, a large limb struck one of the workers and fractured his back, and he is now paralyzed from the waist down.  The insured carries a $300k limit on their homeowner’s policy with no umbrella.  The full value of the claim is likely $3,000,000 to $5,000,000 and the insured now faces major exposure to their personal assets.

An insured is the landlord and there was a fire in one of the units and 2 children were killed.  There are disputes on who is liable for the loss, but the insured only carried a $100k liability limit on this property and they had no umbrella despite owning several rental properties.  This claim is still pending, but the insured will likely making an out of pocket contribution to prevent getting a potential large jury verdict against them that is well in excess of their liability limits.

Call your agent to get quotes on umbrella policies! Premiums begin at $10 a month… very inexpensive compared to how much it may save you one day!

INTRODUCING… Many companies are now starting to add discounts on auto policies if there is an umbrella policy covering it. Safeco Insurance is one example. You can save 10% on your auto premium just by having an umbrella policy! In many cases it cancels out the additional premium.