Don’t Get A Deer Caught In Your Headlights! 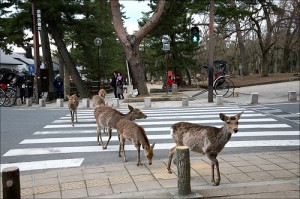 It’s deer season! Deer migration and mating season runs from October through December, which means a spike in movement and population. What does this mean for you? More deer-vehicle related collisions.  The Insurance Information Institute estimates that there are more than 1.6 million deer related collisions each year, resulting in over $3.6 billion in vehicle damage. Including medical payments and out of pocket expenses the total cost of deer related claims is approximately $4.6 billion a year!!!!

– Deer are not just found on rural roads near wooded areas, many deer crashes occur on busy highways near cities.

– Deer are unpredictable, especially when faced with glaring headlights, blowing horns and fast-moving vehicles. They often dart into traffic.

-Deer often move in groups. If you see one, there are likely to be more in the vicinity.

When driving, the I.I.I.  recommends taking the following precautions:

– Drive with caution when moving through deer-crossing zones, in areas known to have a large deer population and in areas where roads divide agricultural fields from forestland.

– When driving at night, use high beam headlights where there is no oncoming traffic. The high beams will better illuminate the eyes of deer on or near the roadway.

– Be especially attentive from sunset to midnight and during the hours shortly before or aftter sunrise. These are the highest risk times for deer-vehicle collisions.

– Brake fimly when you notice a deer in or near your path, but stay in your lane. Many serious crashes occur when drivers swerve to avoid a deer and hit another vehicle or lose contraol of their cars.

– Do not rely on devices such as deer whistles, deer fences and reflectors to deter deer. These devices have not been proven effective.

Remember, if you do hit a deer or other animal, try to avoid going near it or touching it. A wounded animal will be frightened and could hurt you or injure itself more. Call the highway patrol, or your local police department as soon as possible.